A Tale Of Two Nerds

Like most development stories, it started off with two nerds wanting to build something cool. After four years of service together at Electronic Arts, and a brief intermission, we decided to get the band back together and create what is now known as Atomic Brawl.

After some paper prototyping and many heated discussions about What The Hell We Were Building, development began in earnest in March of 2011. A year and a bit later, we’ve got a real live asynchronous multiplayer strategy game, currently in beta testing with about 80 rabid testers. Not that we’re biased, but the game is awesome! We’ve drawn from some our favourite games, including Magic The Gathering, Final Fantasy Tactics, and maybe a touch of the flavour from something like Earthbound, and made it available and playable in any good old browser (including mobile).

The game, as of today, looks a little something like this (final art still pending): 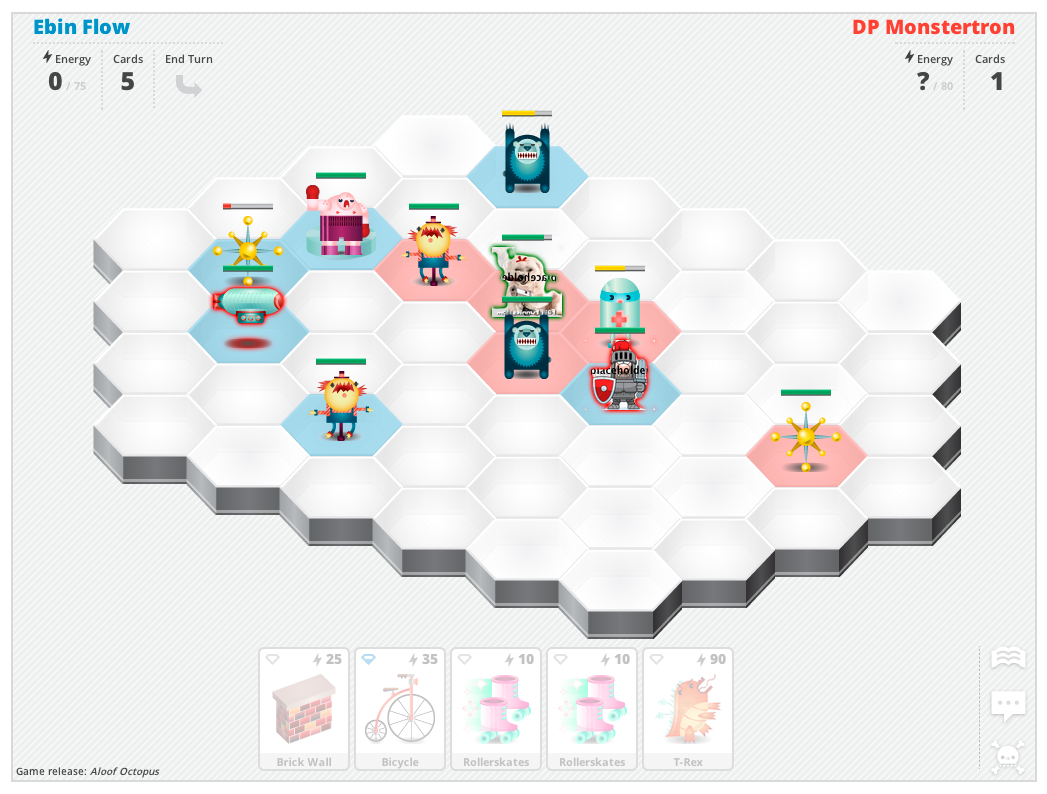 It’s asynchronous, so you can play as fast or as slow as you like, and you can have as many games on the go as you want. Playing the game earns you rewards which gets you access to more cards, which add to your collection and can be used to power up your deck and come up with new strategies.

Unlike most other online card games, our cards have fairly diverse effects that can create very interesting gameplay situations. Some examples:

You pay for cards using “energy”, which increases automatically throughout the game. The question is, do you stack your deck with low-cost cards in the hopes of polishing your opponent off quickly? Or do you delay the game and knock them off with more powerful cards later on? Do you focus on cards with high movement or high attack? Or perhaps you play loads of traps then try to lure you opponent into killing themselves? These are a but a few of the multitude of strategies you could try in Atomic Brawl.

Finally, thematically the game is light hearted and fun. While we all love our high fantasy, or future warfare, we wanted a game where a Sugeon with a Big Foam Hand could punch a Pink Tutu-wearing T-Rex and have it explode causing AOE damage because it had eaten a Burger Bomb several turns earlier. This is that game.

Okay, so why does this blog exist? Well, we’d like to tell our development story and give a bit back to the community that we love so much. For the next few posts, we’ll cover how we got started, including some of the pitfalls we hit and the decisions we made to get us where we are today.